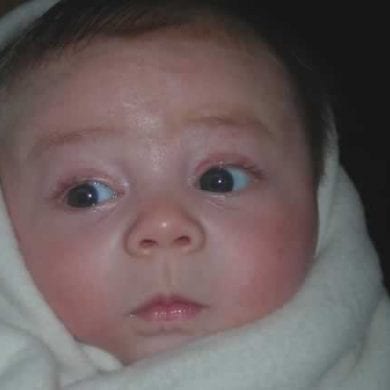 Baby Michael has been a blessing for us since the moment we laid eyes on him and heard his first cry. As soon as we got married, we knew we wanted to start a family right away. We both have family and friends who have become parents by adoption and we have seen personally the love and devotion of their families. We were excited at the possibility of adoption but were overwhelmed by the whole process. We heard it would take years to adopt internationally and thought domestic adoption was impossible. When we contacted Adopt Help, they were very warm and personable and reassured us that domestic adoption was achievable and that we would definitely become parents more quickly than we thought.
Months would pass and there were moments when we thought our dream of having a child would never happen, but Adopt Help always reassured us that it definitely would. Well, they were right. Months later, when we least expected it, we got a call from Meredith who then told us a Birth mom was 8 months pregnant and chose us as potential parents for her child. We were so overjoyed and nervous at the same time. Things had to move quickly and we didn’t have to time to be nervous or think about all the details. Adopt Help guided us through every step of the way from beginning to end. Three weeks later we drove 10 hours and we were in the delivery room with both birthparents while our little baby boy was born. We fell in love with Michael right away and there is no doubt that he is meant to be our son.